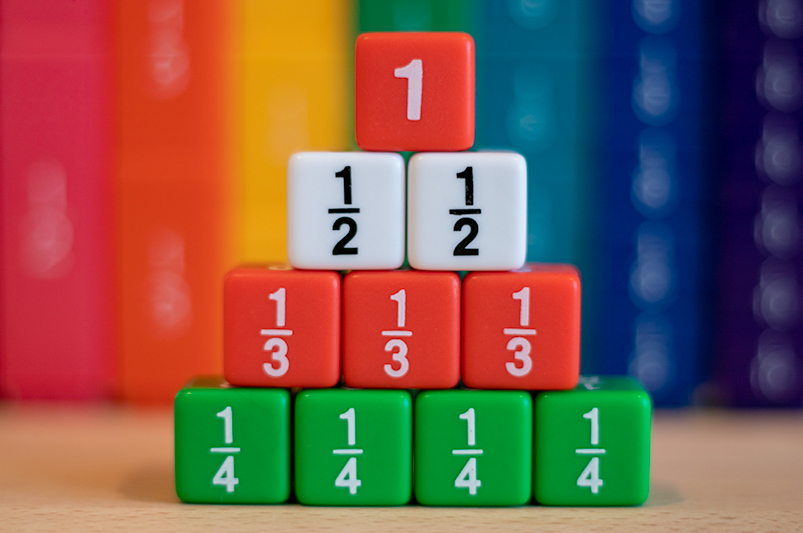 *Note: Dividing fractions by fractions is a 6th grade standard, and the underlying skills are learned in progression, starting in 3rd grade.*

Many students (and adults) are intimidated by fractions. I get it, I’ve been there, too.

Chances are, if you were taught the traditional method for dividing fractions as a student, one of the following phrases would ring a bell: Keep, change, flip; invert and multiply; or multiply by the reciprocal. If you were anything like me as a student, you jumped through the hoop, solved the problem, and moved on because you could produce the right answer. Ask many adults why flipping/inverting/multiplying by the reciprocal works, and you’ll likely find out that they are just as confused now as they were when they were young students. What’s a reciprocal, anyway?

Simply put, division is taking a quantity and distributing it into an equal number of sets or groups; it is the inverse of multiplication, which is combining a number of equal sets or groups to create a new, single quantity. If multiplication is repeated addition, then division is repeated subtraction. In division, the number being divided is referred to as the dividend, the number or size of sets/groups the dividend is being divided by or into is called the divisor, and the term used for the answer to a division problem is the quotient.

Let’s take a look at this simple division expression with whole numbers: 24÷6. In this expression, we are being asked to determine the number of sets or groups of 6 (the divisor) that can be removed from (or are contained within) 24 (the dividend). If we repeatedly subtract 6 from 24, we will find that we can subtract 6 a total of 4 times from 24. Four sets/groups of 6 is equal to 24, so the expression would simplify to 4 (our quotient).

Perhaps you’ve heard of a broken bone as a fracture. I think that’s a great way to think about fractions; they’re just whole numbers broken into equal-sized pieces. Fractions are used to represent equal-sized parts of whole numbers. Commonly, we represent fractions with two different numbers, separated by a horizontal line (although in this post, due to formatting constraints, the line with be a diagonal). The top number is called the numerator, and it represents the number of equal-sized pieces that are grouped together. Underneath the horizontal line, the number on the bottom is referred to as the denominator, which is the number of equal-sized pieces needed to create one whole.

Let’s take a look at the fraction 3/4 (pronounced “three fourths”). Here, the numerator is 3 and the denominator is 4. The fraction 3/4 means that there are three equal-sized pieces of something that you would need four pieces of to make a whole. An example of this would be my family of four: my wife and I have two children, so if we had 3/4 of our family present, that would mean that one of us was missing.

To divide fractions, it might be best to look at an example problem, such as 1/2 ÷ 1/4. Remembering that division is taking one quantity and distributing it into equal-sized sets or groups, we can read this expression as asking the question, How many 1/4 are in 1/2? There are a few methods we can use to solve this question, and in this post, we’ll look a few that will help us understand the shortcut of multiplying by the reciprocal.

Dividing Fractions by Multiplying by the Reciprocal

Why Teach Other Methods?

Perhaps you’re thinking, If we can get the same answer when we multiply by the reciprocal, then why bother teaching other methods? That’s a fair question. The problem isn’t with students learning that you can divide fractions by fractions when you multiply by the reciprocal. The problem is that many times, the conceptual understanding behind why this shortcut works is skipped over, either because the teacher feels rushed (there’s a lot to cover in a school year) or because the well-meaning adult/teacher doesn’t understand the concept well enough themselves to explain it any other way.

I actually like the idea of teaching students to “multiply by the reciprocal” because it makes sense to do so (after they understand why they are doing that). This phrase really captures what’s going on when we want to quickly arrive at an answer, unlike tricks such as “keep, change, flip” or “invert and multiply.” Phrases such as these don’t rely on any reasoning or require a student to make sense of what they’re doing. By having students model repeated subtraction and then advancing to creating common denominators (which could again be modeled), students build conceptual understanding of what is going on when a fraction is divided by another fraction. Once understanding has been developed and students are able to explain the process, shortcuts such as multiplying by the reciprocal are helpful rather than harmful.

Slow is Smooth. Smooth is Fast.